I have never felt an urge to jump into the ocean here, even on the hottest of summer days. Part of it is that it is freezing cold (very unpleasant) and the other part is that moana is vast, beastly, unconquerable and full of big unfriendly fish (very scary). Hence, the number of enthusiasts splashing and dashing, water bombing, water marathoning, etc. always mystified me. Well, that was until I decided it would be a great idea to take part in an ocean swimming event of some sort; it sneakily turned into the plural, events, as when it comes to that sort of thing temptation abounds in this city.

I had a hard time pinning down where the desire for this came from. It seemed like it’d come from absolutely nowhere. But then I got hold of Annette Lees’ awesome book Swim, which promised much needed inspiration for the reluctant wild swimmer, and it all made complete sense, plus explained a lot about the above mentioned inexplicable behaviours Kiwis display when in the proximity of water. I concluded that with so much water surrounding and crisscrossing the islands of New Zealand being able to swim well in open water is an essential survival skill. Although I was once a competitive swimmer and would spend four hours plus in the swimming pool each day, open water swimming requires so much more, plus I have gotten a li’l rusty. Thus, I further reasoned that acquainting myself with the ways of big water could only do me good.

In hindsight, I am happy I followed my unfathomable urges at the time to have a go at wild swimming here. I have had some great experiences and a new found love for swimming (albeit slow swimming it is) whilst preparing for various open water swimming events in Wellington and this blog is going to be about my swimming exploits.

This iconic swimming pool is a gem in the city. It opens in late October and does not close until the end of the summer in early April. It is 30.5m long and is heated. It does get quite busy at the weekends but during the week, even at peak times, is fairly quiet and there have been occasions where I have luxuriated in a lane all by myself. It attracts some dedicated souls who are in for long swims. This is great, if you happen to be in for the same sort of thing as it feels less lonely and loony, especially when sensibility starts kicking in and one starts questioning what the point of pointless pursuits is. Thank you fellow swimming enthusiast for pulling me through some insanely long and excruciatingly slow swims I staged for myself! 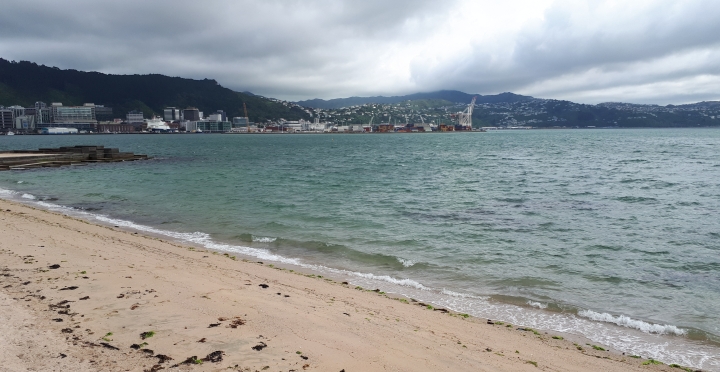 Perhaps the most popular spot in town for open water swimming. I had my first swim in the ocean here in mid-November on a gloomy, overcast day (see photo above). It was before 8am and as I was getting ready for my plunge in I was greeted by a cheerful fellow swimmer on his way out who chirpily reported that it was rough out there but not cold. I have always known that cold is relative and that was confirmed that day! It was SO freezing cold that it took about 10 milliseconds upon dipping my big toe in for my entire body to go numb. I wore a wetsuit and turned blue within 10 minutes. That day I did spot quite a few skin swimmers, though.

On my second swim a week later I was able to double the length of time I spent in the water, approx. 30 mins. I also had to double the time I spent in the sauna after the swim. That is the Freyberg swimming pool  sauna – the loveliest, coziest place in the whole wide world after a freezing cold ocean swim. I also had to let go of unrealistic ambitions that I was going to be able to strip off my wetsuit and swim only in my swimming costume cum skimpy running outfit at the Splash and Dash event the following week. Nightmares about being stuck in my very wet and sticky wetsuit and getting even more stuck with each attempt to get unstuck promptly followed.

Surveying the course before the event, up to the Oriental Bay fountain and back.

I had not done an aquathlon race (swim and run) before so did not know what to expect. All I knew was that the transition (ie getting into running gear after the swim) could be more challenging than the swim and the run put together. I tried to do some visualisation before the event and imagined myself doing a dolphin leap out of the water and as I was just about to land on to the shore I transformed  into an antelope and set off galloping gracefully. Surely, that was going to help.

It is race day and the weather is pretty grim but then just an hour before the event the sun makes an appearance. Yay but nay it turned out, but about that later. I expect that there would be only a handful of enthusiasts but I cannot be more wrong. There are perhaps over a hundred people entering the race that evening. I sign up for the 730m swim and the 3km run and try not to think about how cold the water is. Before I know it I have lined up at the start line and am running towards the water. I am in a washing machine for the first couple of hundred meters and I get my fare share of kicks and knocks. That does not bother me so much as all I can think of is how freezing cold it is. I lose all sensation in my limbs almost immediately. That makes things a tad tricky as my limbs decide to do their own individual thing and I cannot reason with them that coordination and good technique are going to serve us well. I am swimming some stroke unknown to me previously. The course demarcations which were unmissable from the shore have all vanished and I have to do to some breaststroke to orient myself. I am definitely going to take my time to finish this swim. Soon enough I have reached the half turnaround point and as I turn around I swim into a blaze of shimmering glare. I cannot see a thing and do some more breaststroke, take my goggles off a few times, feel dizzy and swallow gallons of sea water. After all the sun was a curse in disguise. Somehow I make it to the end and in my elated state to have made it to the shore I manage to get through the dreaded transition without much ado. The visualisation work paid off in the end! With a salty drool, frantic grin and tonnes of sand in my trainers (obviously I am leading a sock free life) I am off on my 3 km dash along the waterfront. Beloved Freyberg sauna, I am on my way to you!

Not quite as I did love it and want to do more.

The deed is done! I have signed up now. I had a month long debate (with myself) about which distance I should sign up for. I first settled on 1 km but then a series of events made me feel like a complete chicken for not going for the maximum distance of 3 km. Firstly, posts about Ross Edgley’s epic splash around the United Kingdom kept cropping up in my social media feed (a consequence of starting to follow a countless # of open water swimming pages). Secondly, I learnt from Annette Lees’ book (which is packed with a tonne of other interesting facts like this one) that Hinemoa, the, high-born, puhi, woman of Owhata, in Rotorua, had to swim for over three kilometers in the darkness of the night to get across the lake to be with her beloved Tutanekai. I am such a sucker for a romantic story. How could I go for anything below 3 km!?

The event organisers make this swim sound simply irresistible! I get full of excitement thinking about it and cannot wait to share with you how it goes. Last summer I spotted a pod of dolphins there…

One thought on “Testing the waters around Wellington”